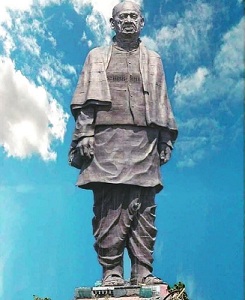 • The Prime Minister inaugurated the structure on the occasion of Sardar Patel’s 143rd birth anniversary, dedicating the Statue of Unity to the country.• At 182 metres, the statue of Sardar Vallabhbhai Patel will be the tallest statue in the world, surpassing the height of Spring Temple Buddha in China, which had previously held the record at 153 metres. • The structure will be double the size of the Statue of Liberty in New York city in the United States.• A viewing gallery has been set up at a height of 135 metres, which can accommodate 200 visitors at one time. It offers a spectacular view of the Sardar Sarovar Dam, its reservoir, and the Satpura and Vindhya mountain ranges.• The dedication ceremony shall comprise a flypast of IAF aircraft and performances of cultural troupes.
• The Surya Kiran of the Air Force will perform aerobatics in the sky over the statue while spreading the colours of the Indian flag in the sky. At the same time, a team of Jaguar fighter aircraft will also fly and a team of MI-17 choppers will shower rose petals on the statue.
• Besides, cultural programmes and folk dance performances by artists from Gujarat, Punjab, Assam and Mizoram have also been planned.Other DetailsThe Statue, set up under the Sardar Vallabhbhai Patel Rashtriya Ekta Trust, has been constructed at a cost of Rs 2,989 crore in less than four years. Built by engineering major Larsen & Toubro Ltd, the statue will be treated as the largest memorial to the ‘Iron Man of India’.
Approximately, more than 70,000 tonnes of cement, 24,000 tonnes of steel and about 1,700 tonnes of bronze have gone into its construction. About 15,000 tourists are expected to visit the statue daily.
Background
PM Modi had laid the foundation stone of the project on October 31, 2013 when he was the Chief Minister of Gujarat.
With the unveiling, the statue will become a representative and inspiration of Unity, Integrity and Peace across the globe.